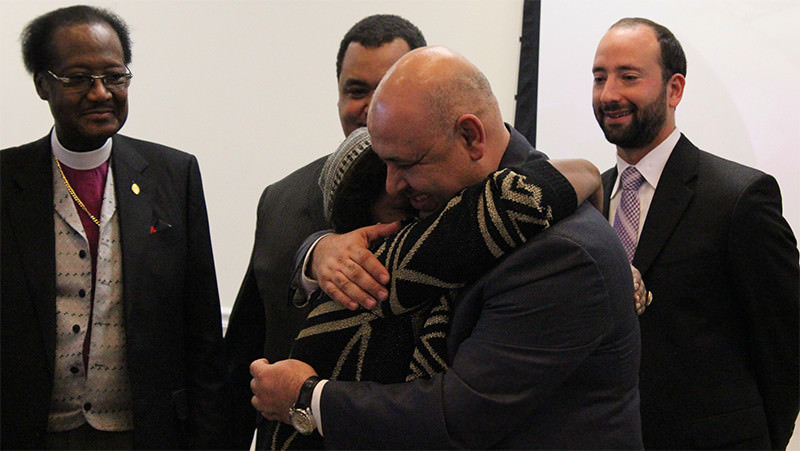 Two formerly homeless women rejoice in the life-changing gifts of a car and a home.

Dr. Martin Luther King, Jr. had a dream. A servant of humanity, he wanted his life to be remembered as a life spent in service to others, ensuring freedom and equality for all people.

It was in that spirit, at a special luncheon honoring the legacy of Dr. King, that DRMM astonished two formerly homeless women with gifts that would have a huge and immediate impact on their lives—a house and a car!

“This is our way of honoring the remarkable legacy of Dr. King,” says DRMM’s President, Dr. Chad Audi.

Both the car and the house were donated by friends like you to help people who have overcome homelessness and other challenges to take the next step toward a life of dignity, hope, and true independence . . . people like Lynette Bradley and Sharon Thompson.

Lynette and her three children, ages 3, 4, and 6, became homeless a year ago. It was a frightening time for this young mother, as she constantly moved her family from place to place, relying on friends and shelters to keep them off our city streets.

But the day came when Lynette had to face the truth—she and her children were out of options. “My daughter looked up at me and asked, ‘Mom, am I going to be homeless when I get to be your age?’”

Every shelter Lynette called had a waiting list, but when she called DRMM, she was overjoyed to hear that she and her children were welcome at our Genesis House.

In addition to safe refuge, your support put Lynette on the fast track to self-sufficiency and independence. Within months, she was working as a house manager at one of our shelters and had saved enough to move her family to a rental property. But to her horror, rent and the cost of living consumed her paycheck each month, leaving her and her children almost as vulnerable as before.

Thanks to caring friends and partners, DRMM was able to place Lynette and her children into a modest, three-bedroom bungalow complete with donated furniture and appliances. At the end of one year, if she is able to maintain the home and pay the taxes on her own, the deed will be transferred into Lynette’s name. “I am so blessed! No one’s ever given me anything. I’ve always had to work for it,” Lynette says. “Now, I have been given the ultimate gift. I can’t do anything but say ‘Thank you!’”

Like Lynette, 60-year-old Sharon Thompson worked hard to overcome homelessness and credits DRMM with saving her life. “When I walked through DRMM’s doors, my life changed!” Sharon says. “DRMM is more than just a bed and a meal,” Sharon says. “They really do change lives!”

Sharon burst into tears of joy when Dr. Audi announced that DRMM was giving her a car. Not only does the late-model Oldsmobile free Sharon from a two-hour commute on public transportation each work day, it gives her a sense of dignity and hope that are such critical components to all we do here at DRMM.

On behalf of Lynette, Sharon, and so many other individuals and families whose lives have been transformed, thank you for your ongoing support of DRMM. Your financial gifts provide emergency food, shelter, and the critical programs that can rebuild lives. And your donation of property, vehicles, and other items allow those who complete our programs to take the next step toward a life of dignity, hope, and independence.

Giving second chances all year round