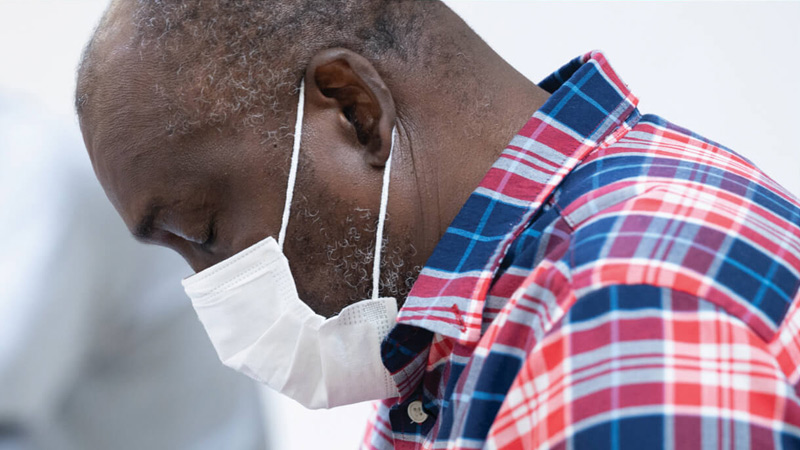 At 6 foot 7, Terry doesn’t just stand, he towers. His strong physical appearance, however, covers the pain he feels inside. “After all I’ve been through, I consider myself broken,” Terry shares.

The 54-year-old explains that he struggles with mental health, alcohol abuse and anger issues, admitting that he tried committing suicide nine times. In addition to self-inflicted injuries — like cutting his wrists and taking over 100 pills at a time — Terry has been arrested, shot and miraculously survived two comas. “I’ve lived under bridges and survived by eating out of garbage cans,” he shares. “My life has been like chasing the devil. I gave out a lot of times.”

Thanks to friends like you, Detroit Rescue Mission Ministries is here for hurting people like Terry. We want to help rebuild lives, one step at a time. It often starts with a nutritious meal or a night of shelter. The life-changing programs and counseling resources help people like Terry turn their lives around. “Now, I attend three meetings a day at the Mission and have a one-on-one with a counselor,” Terry says. “The Mission is helping me to think differently.”

The program classes give Terry insight into new behavior and how to change habits and bad influences. Terry has also embarked on a spiritual journey at the Mission. “Faith don’t make things easy, but it makes things possible!” he says. “Even though I pursued the devil, love won. I’m reaching for a better life now.” Terry says he wants to continue focusing on sobriety and begin helping others find a better life also. Thank you for your continued support that makes stories like Terry’s happen. Together, we are building a better community . . . one life at a time!