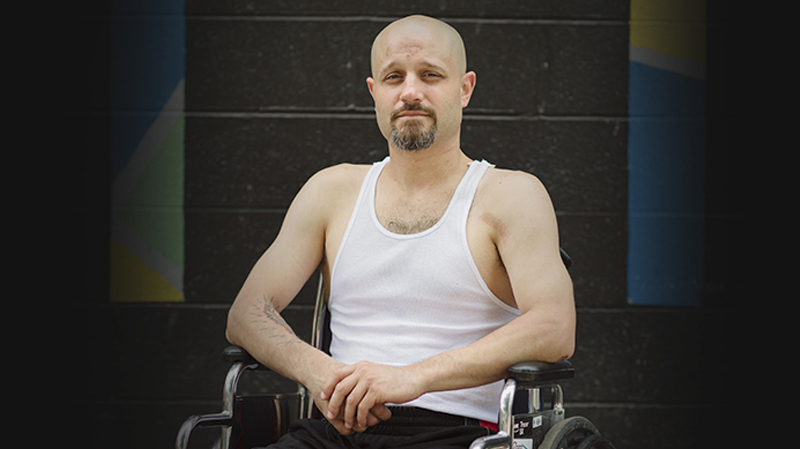 Each and every day I see people who are suffering and in pain. Men and women who are in desperate need of food, shelter, and other emergency services . . .

But when I first laid eyes on Michael, I was shocked. He was rail thin, confined to a wheelchair, and had huge scars on his face, shoulder, and knee.

I made sure the young man got a plate of food, then I sat and talked with him. I learned that Michael had been homeless and living under a bridge . . . until the fateful night when authorities insisted that he move on. Afraid to go to jail, Michael left the bridge he’d called home for so long. But because he had nowhere else to turn, he decided to take shelter in the parked car of a friend thinking, “He won’t mind . . .”

Michael woke with a shock to find the car careening down city streets at 70 mph.

He saw his friend was behind wheel, but the man was so drunk he didn’t know anyone else was in the car! Moments later, Michael was ejected from the vehicle and hurling over pavement for what seemed like an eternity.

Doctors put Michael back together again with stitches and skin grafts, but that was just the start of what will be a very long journey. Many surgeries lie ahead for this young man, who knows he’s lucky to be alive and wants to make the most of the second chance he’s been given.

Some scars you can see, others are buried deep down . . .

Over that one hot meal with Michael, I learned that he had as many scars buried away as the ones I could see. He’d lost loved ones and family members to drugs and suicide, and it had rattled him to his core.

But Michael had learned that running from his sorrows hadn’t done him any good. “For almost two years, I ate out of garbage cans—whatever I could find.”

He described long, hungry, lonely nights filled with frightening attacks by coyotes and a rising creek that threatened to wash him away! Then came the accident that almost took his life.

This Christmas will be very different for Michael

For the first time in a long time, Michael has safe shelter to help him heal physically, emotionally, and spiritually. He has good nutritious food, unlike anything he has known in years. He is surrounded by people who encourage him as he rebuilds his broken life.

“Without DRMM, I might still be under a bridge. They are helping me get a job and my own place. It’s nice to have a bed, to be fed, and not to have to dive into dumpsters for meals,” Michael says. “I’m happy to be here and I’ve met so many good people. I’m 100 percent committed to my new life—my future.”

Will you help us reach “the least of these” this Christmas season?

There are so many other people like Michael who will come through our doors seeking a fresh start that begins with the kindness of a good hot meal.

Please make a gift of meals now, and ask everyone you know to join you, because every $1.95 we receive will provide a delicious Christmas meal plus life-changing help to overcome life’s challenges.

Thank you for giving generously now to reach those who are lost and battling homelessness, joblessness, or addiction. Together we can make this a Christmas filled with help and hope.