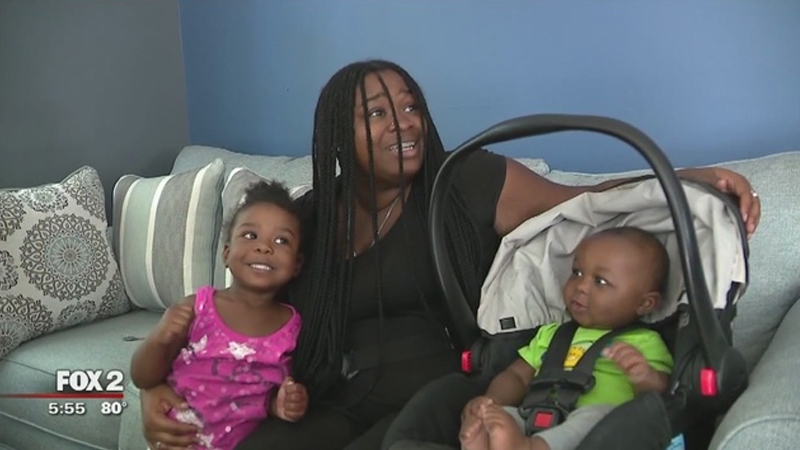 Homeless and desperate – a 26-year-old mother of three young children reaches out for help and gets a response she never would have imagined.

“We will give it to her today – she can actually come and sleep in it tonight,” said Chad Audi, director of Detroit Rescue Mission Ministries.

Alboney Siebert gets a first look at her new home – a place for her and her three young children to lay their heads and to call their own.

It’s a gift, rent-free for two years from Detroit Rescue Mission Ministries, the 110-year-old organization – that helps the homeless.

“I was just sending out emails – crying out for help because I know I don’t have an income –  and I have my babies,” she said. “I know I’m never going to be out of this situation without a job, no money – I just want to thank you all from the bottom of my heart.”

The tears come from a place of happiness and relief after months of desperation, Alboney Siebert was nine months pregnant with baby Kilyn when she and her daughters were evicted from their home. Even though she had paid her rent, she fled to North Carolina to be with her brother – but her car was stolen there.

She and her children have been in shelters, on the streets – but about a week ago, her email found its way to Terra Defoe – a senior advisor to Detroit Mayor Mike Duggan.

“I’m glad that I was there to receive the email and understand and to reach out to her and point her in the right direction,” Defoe said.

Defoe reached out to Detroit Rescue Mission Ministries – their goal – to get the family stabilized – help
Alboney find a job – so she can get eventually get her own place.

“The house is totally furnished – totally stocked with food – and she can actually live today in the house and she doesn’t have to worry about a place called home anymore,” Audi said.

Audi says it was meant to be. It turns out Alboney’s 7-year-old daughter was just enrolled in second grade in a school that happens to be nearby. She’s at her first day – but will be coming home to a big surprise.

“She’s about to be blown away – she’s going to be excited,” she said.

Little 2-year-old Riah already made herself right at home while Alboney was just grateful her cries for help were finally heard and she’s ready to get back on track.

“I’m just ready to work – take care of my kids and show them the life,” she said.